262955 Design of a Modular Safety System for the Artificial Pancreas: The Health Monitoring System (HMS)

Type 1 diabetes mellitus (T1DM) is a metabolic disease in which blood glucose (BG) cannot be regulated due to insufficient insulin production resulting from the auto-immune destruction of insulin-producing beta cells in the pancreas. Optimal control of this disease may be achieved in a variety of ways, but is essential, because poor control can result in serious long- and short-term complications. Automatic control has become realizable recently, due to improvements in technology for glucose sensing and insulin administration (1, 2).

The goal in the automatic control of T1DM is the artificial pancreas device system (APDS), a combination of a continuous glucose monitor (CGM), an insulin delivery device, and a control system that executes insulin delivery and monitors the system for safety. The APDS is a high-risk device, due to its automatic delivery of a crucial hormone that is both necessary for life and potentially dangerous (3, 4). Like any high-risk system, the APDS must contain multiple safety layers to ensure the health of the user and the proper condition of the device.

The primary safety concern for a patient using an APDS is hypoglycemia (BG<70 mg/dL), or low BG, which can lead to coma or death if severe and prolonged (5). Another major health concern is hyperglycemia (BG>180 mg/dL). Also, system performance metrics such as pump or sensor error and communication problems must be monitored, locally on the devices and remotely via telemedicine.

There are several differences in the design of the safety system when compared to a traditional chemical plant or other high risk system, due to the physiological constraints of a biomedical system. The absence of redundant sensors due to space constraints and lack of other physical properties to measure are major concerns, particularly due to noisy glucose measurements. One of the most notable disturbances is the human factor: the end user of the APDS can react in an unmeasured or unpredictable manner.

The Health Monitoring System (HMS) has been designed as a process monitoring and alert module that can be executed in real time in parallel to any glucose controller for the APDS. The HMS will include several safety modules, including hypoglycemia, hyperglycemia, and missed meal detection; pump and sensor error detection; and communication monitoring.  The primary module of the HMS, the Low Glucose Predictor (LGP), was designed first to predict and prevent hypoglycemia and is presented here.

The LGP has two major modules. The first module consists of a pre-processing segment that prepares CGM data for prediction by filtering the data for noise and drift, detecting sensor calibration, and accounting for missing data. The second module is the core algorithm, where predictions of hypoglycemia are made by extrapolating an estimation of the rate of change of the CGM data. These data are sent to the HMS to issue local audible and visual alerts and are transmitted as short and multimedia messages (SMS and MMS). The automatic, redundant alert system of SMS and MMS messages is the key safety feature of the HMS (see Figure 1). These messages are sent to the physician in charge or other primary contact with a profile of the current trend and a short-term prediction (6). The HMS alarms are acted upon by administration of 16g of rescue carbohydrates. 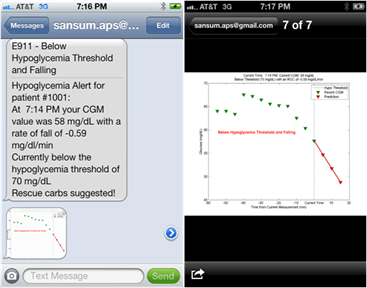 The HMS was designed using retrospective, ambulatory CGM data from 393 days of patient data. It was then tested in silico using the FDA-accepted UVA/Padova metabolic simulator (7). The HMS was recently validated in clinical trials in conjunction with a zone-model predictive control (zone-MPC) controller via the Artificial Pancreas System (APSˋ) (8), both designed at UCSB/Sansum Diabetes Research Institute (9-11) . During the first clinical trial, the subject overdosed ~3U of insulin prior to her arrival to the closed-loop clinical session (not per the experimental protocol). Even with insulin reduction by the controller and four carbohydrate supplements after HMS alerts, hypoglycemia was unavoidable but manageable due to the HMS, confirming that a safety system to detect adverse events is an essential part of the APDS.

A total of 12 full-length, closed-loop sessions were conducted with the HMS/zone-MPC system (mean time in closed-loop 23.5 Ý 0.7 hours). Only 1.8% of the time during closed-loop operation was spent under 70mg/dL (considered hypoglycemia by the American Diabetes Association) (12). This result is a significant improvement over the corresponding result for ambulatory data (approximately 10%) (13). A total of 46 HMS alarms were sounded (mean 4 Ý 2 alarms per subject), at an average CGM value of 82 Ý 11 mg/dL, with a recovery of 10 mg/dL within 30 minutes on average.

The CGM values, aligned from the time of the HMS alarm, are given in Figure 1, showing that alarms were sounded as the CGM values were nearing the hypoglycemia region, causing recovery into the euglycemia zone (70-180 mg/dL) with a nadir of 42 mg/dL. The low standard deviation at the onset of the alarm suggests a high specificity of the safety system and confirmation of the necessity of the alarm. The recovery period of about 20 minutes is in agreement with the clinical expectation of reassessing hypoglycemia 15 minutes after 15-20g of rescue carbohydrates, depending on the rate of fall and amount of insulin on board (14). 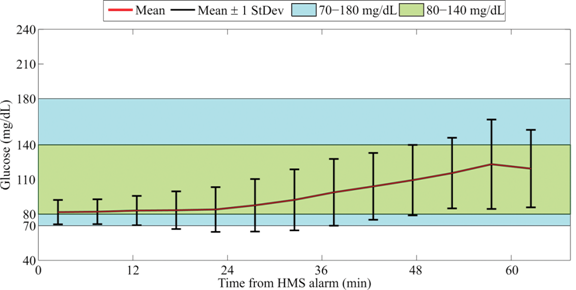 Figure 2: CGM data from 12 clinical subjects with 46 HMS alarms, aligned from the time the alarm sounded. The average CGM value is in red, with the standard deviation given in black brackets. The zone used for the zone-MPC controller is in the green filled area, with normoglycemia in the blue area.

The HMS has been designed as a safety system in parallel to APDS that alerts and mitigates adverse events. This design ensures user safety and adds robustness to the overall system without interfering with the primary controller. The ability of the HMS to be an effective alert system that provides a safety layer to the APDS controller has been clearly demonstrated in clinic, detecting events that were unavoidable even with appropriate controller action. With use of the HMS, adverse events that are not handled by the controller are readily detected and mitigated.

5.         The Diabetes Control and Complications Trial Research Group, "The Effect of Intensive Treatment of Diabetes on the Development and Progression of Long-Term Complications in Insulin-Dependent Diabetes Mellitus", N. Engl. J. Med., 329  pp. 977-86 (1993).