Abstract - The objective of this work is to propose a new methodology to optimize the geometrical characteristics of the cyclone separator to operate with high collection efficiency and low pressure drop. The proposed method basically consists in coupling the CFD code CYCLO-HEXA, “in-house” simulator of gas-solid flows in cyclones developed by Meier et al. (2011), in the optimization algorithm COMPLEX, with nonlinear objective functions and inequality constraints. From the results of CFD simulations, it is observed that the cyclones generated along the iterations converge to a common geometry, due to the restrictions set forth in the objective function, and this geometry gives the best results relative to maximize the collection efficiency with lower pressure drop.

The cyclones are widely used on separating particulate from a gas stream due to its wide range of operation and simplicity in constructive form, which it makes a device with a low investment cost and maintenance. However, it should be noted that the collection efficiency of cyclones is directly related to operating conditions and geometrical characteristics. Despite this simplicity, the fluid dynamics of turbulent flow in cyclones is very complex, with various phenomena including recirculation zones, high-intensity turbulent, high conservation of vorticity, among others. Before the 1960's, the optimization methods and equipment designs were empirical, based on experiments, intuition or semi-empirical calculations, which were used in the similarity laws and testing models. These empirical methods and semi-empirical, due to its simplicity, are still widely used in the design and evaluation of various equipment used in the industry, for example, cyclones. The objective of this work is develop a methodology for optimizing the geometrical characteristics of the cyclone separators, to operate with high collection efficiency and low pressure drop through CFD techniques coupled with optimization methods.

The proposed methodology basically consists in coupling of the simulator of gas-solid flow in cyclones CYCLO-HEXA code, in the optimization algorithm COMPLEX. The CYCLO-HEXA code is the result of improvement of earlier versions developed by Meier (1998) in his Ph.D. work on the development of a general model for the simulation of cyclones. The good results obtained with the Eulerian-Eulerian model (MEIER and MORI, 1998; VEGINI et al., 2008, MEIER et al., 2011) were crucial for this approach was adopted as the standard in the CYCLO-HEXA code. The solid phase is treated like a hypothetical fluid and drag forces between phases are responsible for the gas-solid interaction. The CYCLO-HEXA code makes possible the use of up to five solid phases, each one with size of particle, density and specific volumetric fraction. The finite volume methods have been used to discretize the partial differential equations of the model using the SIMPLEC (SIMPLE Consistent) method for pressure-velocity coupling in a 3-D-space domain with a 3-D symmetric cyclone inlet. The modeling of turbulence is formulated by combining the k-ε model for radial and axial components of the Reynolds stress, and the mixture Prandtl theory for the tangential components.

The optimization algorithm COMPLEX used in this work, consists of maximizing an objective function subject to inequality constraints (Fig. 1-a), that for this case, means the maximization of the collection efficiency establishing a maximum limit for the corresponding pressure drop. As variables, we chose five of the eight basic geometric characteristics of a cyclone (Fig. 1-b), where each of the five variables has a restriction for upper and lower limits. 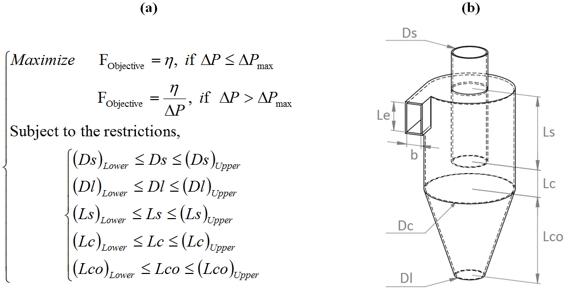 Fig. 1. (a) Objective functions subject to inequality constraints, where η is the collection efficiency and ΔP is the pressure drop; (b) Geometrical characterization of a cyclone.

The optimization method consists in construct a geometric figure with a number of dimensions at least equal to the number of manipulated variables more one. In this particular case, we have five variables, and from there was chosen a ten-dimensional optimization algorithm COMPLEX (twice the number of variables). The generation of these ten points is conducted randomly by a random number generator, where each point represents one different geometric configuration of a cyclone according to Figure 2.

Fig. 2. First iteration of optimization algorithm COMPLEX, where each point represents the geometric configuration of the cyclone.

As a operational condition was used a gas flow of 220 m3/h at 180°C with a loading ratio of 5000 mg of particles per m3 of gas (diluted flow). The particulate system was analyzed using a Particle Size Analyzer by Laser Diffraction Mastersizer S, S-MAM 5005 Model of the Malvern brand. Through the particle size analysis, it was possible to obtain the diameter of the solid phases to the desired fractions, as shown in Table 1.

Table 1. Size of the particulate phase.

Where dsn is the average diameter to the solid phase n and the density (ρsn) adopted for all solid phases is 1400 kg/m3.

As a first analysis, it is possible to verify the geometric evolution of cyclones along the iterations, as shown in Figure 3, where the cyclone in blue had the best performance of the interaction, while the reds color had the worst. The cyclones that presenting the worst results of collection efficiency or higher results of pressure drop will be dropped giving rise to a new geometry. Through the Figure 3, it is possible to observe that the geometries of cyclones become more similar along the iterations of the optimization process, confirming the search for an objective function maximized. 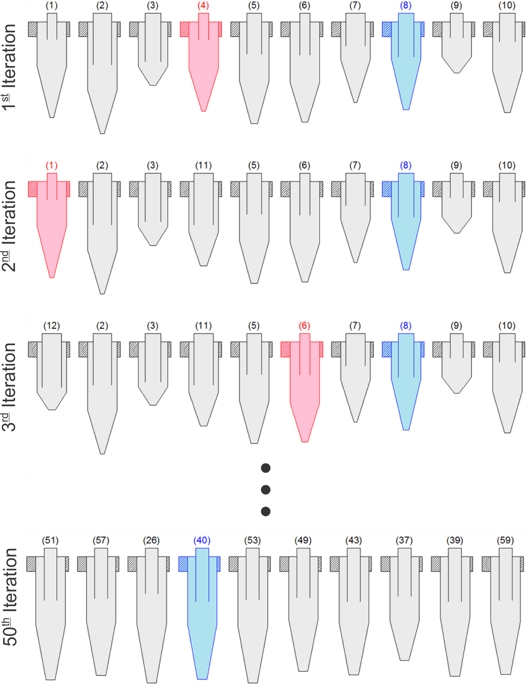 Fig. 3. Representation of geometric evolution of cyclones along the iterations.

Fig.4. Collection efficiency and pressure drop obtained in the first (a) and last (b) iteration.

From the results presented in this work, it is possible to affirm that the proposed methodology for the geometrical optimization of cyclones showed satisfactory results within the operational limits established. It is also worth emphasizing the importance of using CYCLO-HEXA code for simulation of cyclones, because it presents reliable results at a computational cost much lower than required by current commercial software, being possible to resolve  a large number of experiments in a relatively short time, since the complete simulation of each cyclone takes about 36 hours to complete in a personal computer.