Chromium hexavalent ion (Cr(VI)) in wastewater is highly hazardous to the ecosystem. Activated carbon adsorption is considered to be the simplest technique due to low cost and perfect removal. Compared to normal activated carbon (AC), mesoporous activated carbon (MAC) is regarded to be more favorable for removal of the large sized species from wastewater by adsorption due to easy access of the large sized species to mesopores. The objectives of the present work are to study the adsorption performance of Cr(VI) on MAC from aqueous solution to verify importance of mesopores on adsorption of Cr(VI).

The MAC samples tested were prepared from coal tar pitch by using the nano-sized imprinting method. The pore structural properties of the six MAC samples were examined using N2 adsorption at 77K as seen in Table 1. The honeycomb-like porous structure was seen in the SEM image of the MAC (Figure 1) and the scale provided evidence of existing large pores in MAC. 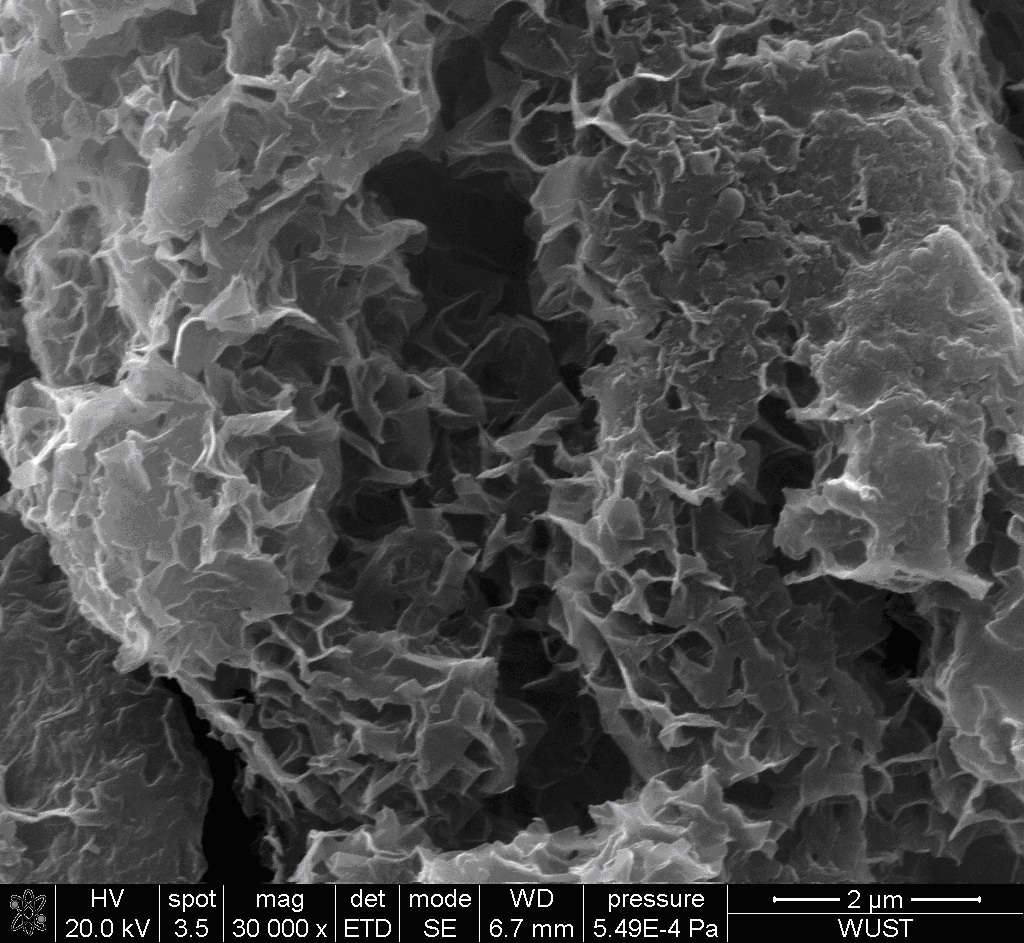 The working solution was prepared by dissolving potassium dichromate in double-distilled water. pH of the solution was adjusted by using either 0.1N NaOH or 0.1N H2SO4. Adsorption experiments were carried out in a thermostatic bath oscillator. 50 mL Cr(VI) solution of known concentration (C0) and initial pH was taken in a 150mL erlenmeyer flask with a fixed dosage (2g/L) of MAC. The mixture was agitated at a speed of 200 rpm in the thermostatic shaker bath for a certain period of time. Except for the runs for investigating the influence of mesopore, AC02 was used in all experiments. Equilibrium adsorption isotherms were measured in 48 hours to ensure attainment of equilibrium. The concentrations of Cr(VI) in the solution were determined by using a UV-visible spectrometer according to the standard procedure.

Percent removal of Cr(VI) on MAC was examined for different pH values of the solution as shown in Figure 2. It is seen that the adsorption displayed a strong pH dependence. A large percent removal of Cr(VI) at low pH can be explained by the strongly electrostatic interaction near the interfacial region between the charged metal ions in solution and the charged surface of MAC. In acidic solution, the charged Cr(VI) ion predominantly in forms are Cr2O7 2-, HCrO4-, CrO42-, Cr3O102- and Cr4O132- which are all negatively charged species. According to pH of the zero point of charge (pHzpc) measured, all MAC samples have the value of pHzpc around 7.35, indicating MACs display a positive charged surface. As a result, the electrostatic interaction played a major role in adsorption of Cr(VI) ions from acidic solution on MAC. With an increase of pH, the percent removal of Cr(VI) is rapidly decreased, ascribed to the competent adsorption of the negatively charged chromate ions and OH- on the surface of MAC. 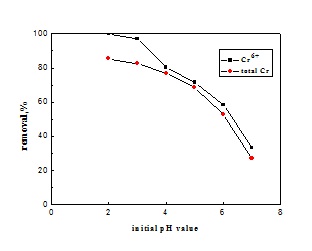 On the other hand, chromium existing in solution is mainly in two states which are Cr(VI) and Cr(III). The stability of these forms in solution highly depends on pH of the solution. In knowledge of chromium chemistry, the negative charged Cr(VI) ions are easily reduced to Cr(III) at low pH in the presence of MAC as shown in following equations (1) and (2).

It is noted from Figure 2. that total removal of chromium is always lower than that of Cr(VI). Particularly the difference increases with a decrease in pH. In fact, the removal of Cr(VI) at low pH is partially due to reduction of Cr(VI) into Cr(III) which are known to exist in various hydrolyzed forms of [Cr(H2O)6]3+, [Cr(H2O)5OH]2+and [Cr(H2O)4(OH)2]+depending on pH of the solution. Clearly, the positive charged surface of MAC does not favor to adsorption of the positive charged Cr(III) species due to electrostatic repulsion.

Adsorption equilibrium isotherms of Cr(VI) on MAC were measured as shown in Figure 3. The positive temperature dependence suggests the chemical nature of Cr(VI) adsorption on the MAC. Langmuir, Freundlich and Dubinin¨CRadushkevich(D¨CR) isotherms were used to interpret equilibrium adsorption data. The values of model parameters and correlation coefficients R2 were presented in Table 2. The correlation coefficient for three models are all >0.95, likely Langmuir model is the best interpretation of the experimental data. The predicted maximum adsorption of Cr(VI) on MAC ranges from 42.52 to 53.79 mg/g when raising temperature from 303 to 323K. 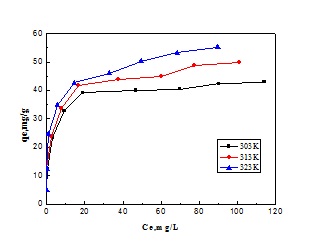 Figure 4 shows the time dependence of removal of Cr(VI) on MAC. It is seen that the MAC displays a rapid initial rate at three temperatures. The fast initial rate is ascribed to the large mesopores of MAC and the gradually lowering rate to approaching equilibrium indicates the formation of steric hindrance in pores with progressing of adsorption of Cr(VI). 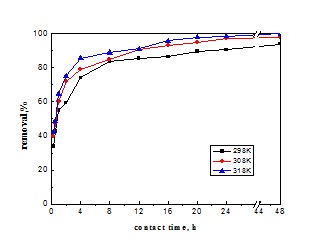 Figure 5 shows importance of mesopores for removal of Cr(VI). The percent removal increased with an increase of mesopore porosity for different length of contact time. With short contact time, the removal was more significantly influenced by the mesopore porosity than with long contact time. It means that the intra-particle diffusive resistance of the adsorbed Cr(VI) visually occurs due to formation of steric hindrance in pores. The larger mesopore prosity, the higher removal approached, but the difference of removal with different contact times was decreased. With an increase of mesopore porosity up to near 92%, the difference of removal completely disappeared regardless of the difference of the contact time, indicating that mesopores dominate the adsorption kinetics during removal of Cr(VI) due to accessibility of mesopores to the large sized adsorbate. In addition, surface oxygen groups in MAC may be one of important factors affecting the adsorption performance of Cr(VI), however, the experimental result will be discussed elsewhere. 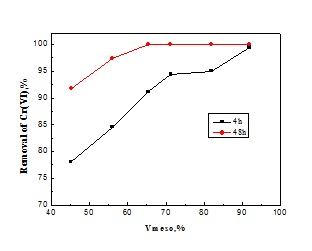