In the present study, an attempt has been made to synthesize bilayered SrTiO3 (~3.5 eV) / WO3 (~2.7eV) thin films by sol-gel spin-coating process on conducting glass substrate to explore its application in PEC cell. Prepared thin films were characterized for: (a) crystalline phase by XRD analysis, (b) band gap energy by spectrometric measurement and (c) surface morphology by SEM analysis. Subsequently, SrTiO3/WO3 bilayered film was used in a PEC cell as working electrode having platinum and saturated calomel as counter and reference electrode respectively and 150 W Xenon lamp as light source for illumination. Maximum photocurrent density 0.091 mA/cm2 at 0 V/SCE was observed for bilayered SrTiO3/WO3 thin film photoelectrode which was two folds higher than offered by SrTiO3 (0.046 mA/cm2) and much higher than that for WO3 thin films [Fig. 1]. The enhanced photoelectrochemical behaviour of bilayered photoelectrodes can be attributed to: (a) the extended absorption towards visible region, (b) formation of mixed oxide at the interface and (c) enhanced charge separation of both the materials resulting in decrease of recombination of charge carriers. 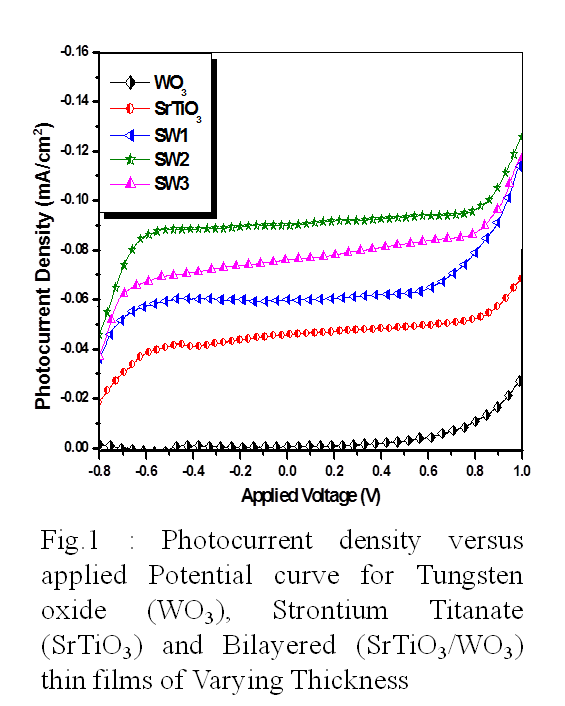