An eLiposome is a liposome encapsulating an emulsion nanodroplet, and can be used for drug delivery.  For example, therapeutic agents are encapsulated inside the eLiposomes, and application of ultrasound can cause the emulsion droplet to change from liquid to gas, thus increasing the volume inside the vesicle, causing rupture and release of the drug.

In this novel method, emulsion droplets were made of perfluorohexane (PFC6) or perfluoropentane (PFC5) and liposomes were made separately and then they were mixed using ultrasound; thus we call this the “ultra” method. Calcein was encapsulated inside the eLiposomes as a model drug. Dynamic light scattering and transmission electron microscopy were used to measure the size of the emulsions, liposomes and eLiposomes. The size of eLiposomes is appropriate for extravasation into tumors with malformed capillary beds.  We hypothesize that ultrasound can be used to break open these eLiposomes. eLiposomes were constructed with folate on their surfaces to induce endocytosis. eLiposomes were used to successfully deliver calcein as a model drug to HeLa cells.

Figure 1 demonstrates that folate was successfully incorporated into PFC5 ultra eLiposomes, and that the folate was necessary to obtain calcein delivery to the cytosol of cells.   Parallel experiments were conducted using eLiposomes prepared with and without DSPE-PEG2000-folate incorporated into the eLiposome bilayer. 200 uL of each eLiposome sample was added to HeLa cells in 12-well plates. The plates were incubated at 37°C for about 2 hours and then 20-kHz ultrasound was applied at 1 W/cm2 for 2 seconds. Finally the cells were washed to remove external calcein and eLiposomes. Figure 1A shows the resulting calcein fluorescence from eLiposomes without folate, while figure 1B shows the parallel experiment having folate incorporated in the eLiposomes. Because the calcein was concentrated (30 mM) in the eLiposomes, it did not fluoresce until released.  There is very little calcein signal observable in Figure 1A, suggesting that very few calcein-containing eLiposomes were endocytosed when folate was absent.  In Figure 1B, the calcein fluorescence is originating from the cell cytosol, not the cell surface, suggesting that the folated eLiposomes had been endocytosed and that the calcein had been released to the cytosol.  Some of these cells exhibit a granular pattern of calcein fluorescence, perhaps indicating that some calcein remains in endosomes, and while released from the eLiposome and diluted sufficiently to fluoresce, some calcein may not have been released completely from the endosome. 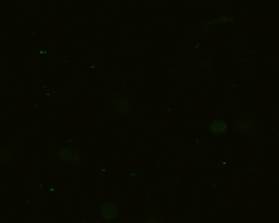 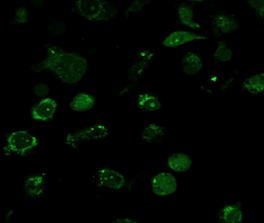 While Figure 1 shows that folate is necessary, Figure 2 shows that emulsions are also necessary for calcein delivery. Folated ultra eLiposomes with PFC5 emulsions and conventional liposomes (without emulsions) were prepared, each containing calcein at 30 mmol. 200 µL of each sample was added to HeLa cells in 12-well plates. Plates were incubated at 37°C for about 2 hours and then 20 kHz ultrasound was applied (1 W/cm2 for 2 seconds). Figure 10A shows very little release of calcein to the cells exposed to folated conventional liposomes (without emulsion) while Figure 10B shows considerable release of calcein in the parallel experiment employing folated eLiposomes. Both these images were collected under identical optical conditions with the same gain and other settings on the confocal microscope. Most cells show calcein distributed through the cell, but again sometimes calcein appears more intensely in punctate spots, which might be unruptured endosomes. 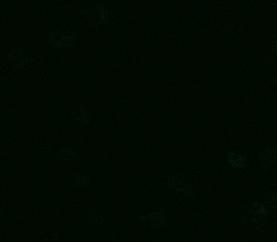 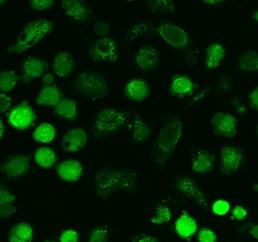 We propose that our eLiposomes can be used in ultrasonically activated drug delivery as follows. The eLiposomes could be loaded with drugs, such as Doxorubicin, using conventional or pH gradient techniques [1, 2]. Upon exposure to ultrasound, the local pressure oscillates above and below ambient pressure. At sufficiently high acoustic amplitudes, the local pressure decreases below the vapor pressure of the PFC emulsion inside the eLiposome.  During this short time, the PFC may start to boil to a gas phase.

Lipid bilayers can only sustain about 3% area expansion before they rupture [3, 4]. For the PFC6 and PFC5 of this research, the liquid to gas expansion ratios are about 259-fold and 137-fold, respectively. For a liposome of 250-nm-diameter eLiposome containing a single 100-nm-diameter PFC6 emulsion droplet, less than 0.2% of the PFC liquid is required to vaporize to achieve the 3% area expansion for eLiposome lysis. Nucleation of the vapor phase may or may not occur on the first negative pressure cycle of the ultrasonic wave.

Although any liquid of high vapor pressure could be employed in eLiposomes, PFCs are useful for making emulsion droplets within eLiposomes because the phospholipids and PFCs are biocompatible and non-toxic [5].