Ceria is a promising material in the field of heterogeneous catalysis, given its oxygen buffering capability and the ability to modify its oxygen stoichiometry depending on the operating environment.1 Besides providing structural support for metal catalysts, it can also serve as an active component in the chemical reactions. Several Water-Gas Shift (WGS) reaction studies have shown increased activity for metal catalysts supported on ceria as compared to other supports or the metal itself.2,3,4 Given the importance of the redox mechanism on ceria, a fundamental understanding of how ceria behaves under a wide range of operating conditions is needed. The oxygen chemistry of ceria, including oxygen vacancies, has been studied extensively5,6,7; however, comprehensive first principles investigations to derive the ceria surface phase diagram have not been conducted. This work focuses on understanding the fundamentals governing the active role of ceria in reaction mechanisms involving oxygen, using first principles thermodynamics (FPT) as well as conventional semi-local and hybrid exchange-correlation density functionals. On the most stable (111) plane of ceria,8 more than 25 oxygen configurations (sub-surface oxygen vacancies, surface oxygen vacancies, and oxygen ad-atom coverages) are studied, which cover the entire range from an oxidized surface to a surface/sub-surface with no oxygen. FPT relations are used to determine the most stable configurations in a wide temperature-pressure regime, as shown in the ceria surface phase diagram. Several features predicted by our surface phase diagram are in excellent agreement with prior experiments.9,10 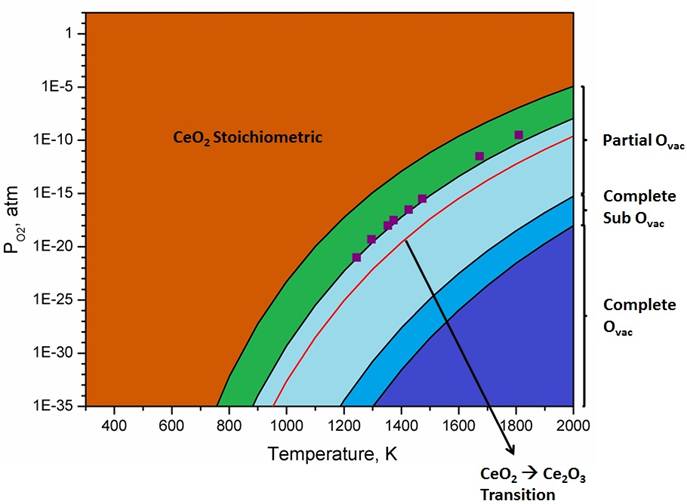 Surface phase diagram of ceria in oxygen-rich and lean environments. ‘vac' stands for vacancies. Experimental data [10] (symbols) indicate the region, where ceria is expected to undergo vacancy formation leading to a non-stoichiometric surface.