Global climate change is the preeminent challenge of the 21st century. Carbon dioxide from fossil fuel combustion is altering the world's environments, potentially in undesirable ways. It is critical to develop carbon-free and environmental friendly energy sources. Molecular hydrogen is currently used as an energy storage medium, and could possibly be used in the future as a transportation fuel.

Water splitting solar thermochemical cycles (WSTCs) are used to decompose water to obtain hydrogen through redox reactions. Of the approximately 200 WSTCs identified thus far, the Cu-Cl cycle (Figure 1) is particularly attractive, since the maximum temperature required of any step within the cycle (530 oC) is much lower than some of the comparable WSTCs such as the Ni-Fe cycle (1100 oC) or the Zn-ZnO cycle (800 oC). The Cu-Cl cycle requires a five-step reaction cycle to generate hydrogen. It is the fifth step, which is the decomposition of copperoxychloride (CuOCuCl2) into cuprous chloride (CuCl) and oxygen, that requires the maximum temperature (530 oC), and it is this step for which we created a solar reactor design.

The traditional solar reactor design has not compensated for solar variation throughout day and night in a way to achieve continuous operation. Instead, for these reactors, the operation routinely starts up and shuts down according to sunshine duration (Figure 2).

We propose a new solar reactor system, shown in Figure 3. Decomposition of CuOCuCl2 occurs within the central reactor tube, from which, the mixed products flow into a separator for further reaction. The inner annular shell around the reaction pipe contains the heat transfer medium (HTM), which flows in a countercurrent direction relative to the reactor flow. A spectrum-selective coating is painted on the surface of this shell. The high absorption and low emissivity coating absorbs the concentrated solar radiation.  The outermost cylinder is a vacuum tube constructed from glass, which is used to avoid heat convection losses to the atmosphere. Concentrated solar power is provided to the reaction system by a reflective parabolic trough (not shown). The HTM is recycled through a tank which functions as a thermal storage device.  The tank buffers the variation of the temperature in HTM and reactor, saves energy during periods of solar insolation and releases heat during times of low solar insolation. The collection of excess heat during insolation ensures a steady hydrogen production during periods of low insolation.

The design described above was modeled by a system of partial differential equations, in which the reactor temperature, temperature of the HTM, and conversion of the reactant (CuOCuCl2) varied with time and axial position within the reactor. The model is a one-dimensional plug flow reactor (PFR) model. The PDEs were discretized into ODEs which were then solved at a series of design parameters and operating conditions within MathCAD software. The goals to be achieved through the choice of the design and operating parameters were the following: (i) to buffer the effects of transient solar insolation in order to maintain a steady operation at 100% conversion, (ii) to minimize the fluctuation of the conversion once the steady operation was achieved. The main constraint to be respected was the maximum operation temperature of the molten salt (700 oC).

First, we compared the directly irradiated reactor (Base case, Figure 4) with the jacketed system, and found that the HTM did attenuate the effect of time varying solar irradiation upon the conversion of the decomposition reaction. Then, we modified the design parameters, such as the solar concentration ratio as well as operating parameters, such as the mass flow rate of HTM, though which we achieved a simulated 100% conversion(Optimal case, Figure 5). Less than eight hours after reactor start-up, steady operation was achieved, and this continued for the length of the simulation (three 24-hour days). At this steady operation point, we modeled a hydrogen production of 3.5 kg/day.  For simplification of this preliminary study, the molten salt flow rate was kept at a constant value, although in our future work, the effects of using a higher solar concentration ratio along with an optimized transient flow rate of the heat transfer medium will be studied to see if the footprint of the HTM storage tanks could be reduced. 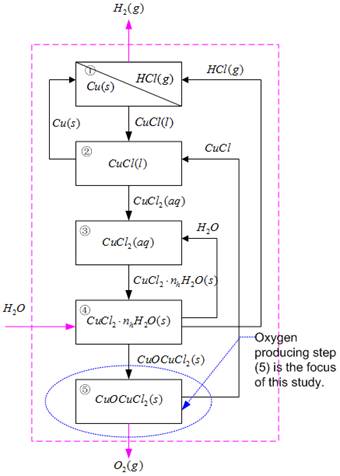 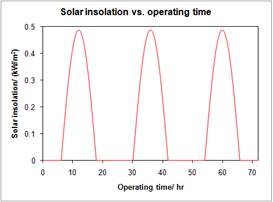 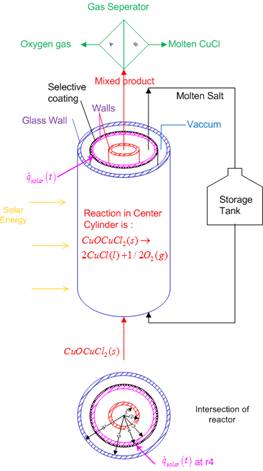 Figure 4 Conversion and temperature at reactor outlet in base case