The metal-loaded photocatalysts may facilitate the charge separation and transfer because metal site actes as the electron acceptor to avoid the recombination of electrons and holes. For this purpose, Ag-SrTiO3 nanocrystal photocatalysts were prepared by hydrothermal synthesis method for reducing CO2 to methyl formate (MF) in methanol via ultraviolet irradiation. CO2 was reduced to MF by electrons on conduction band of the photocatalyst. In order to obtain a high rate of MF evolution, we researched and optimized the preparation procedure of Ag-SrTiO3 by changing the Ag dosage, hydrothermal temperature and time. The as-synthesized photocatalysts were characterized for the structural, optical, morphological properties and specific surface area by X-ray diffraction (XRD), UV-vis diffuse reflectance spectroscopy (UV-vis), high-resolution transmission electron microscope (HRTEM) and N2 sorption analysis at 77 K. The photocatalytic activity was evaluated in a batch slurry reactor. After ultraviolet light irradiation for 6 h, the product solution was qualitatively analyzed by GC-MS (Agilent 5975C) and quantitatively analyzed by gas chromatograph equipped with a hydrogen flame detector (FID). The as-synthesized photocatalysts were found by XRD to have a perovskite structure. The absorption edge of as-synthesized photocatalyst was evidently shift from 400 nm to 700 nm by Ag-loading. The BET specific surface area of the Ag-loaded SrTiO3 photocatalyst was much larger than the pristine SrTiO3 particles. The photocatalytic activities could be further enhanced via extending life-span of the electron-hole pairs by using Ag particle as electron acceptor (Fig. 1). A catalyst of 7 wt% Ag on SrTiO3 with hydrothermal synthesis at 150 oC and 22 h was found to exhibit the highest photocatalytic activity in MF formation rate of 3006 mol/h/g.cat, which was more remarkable than that of pristine SrTiO3. 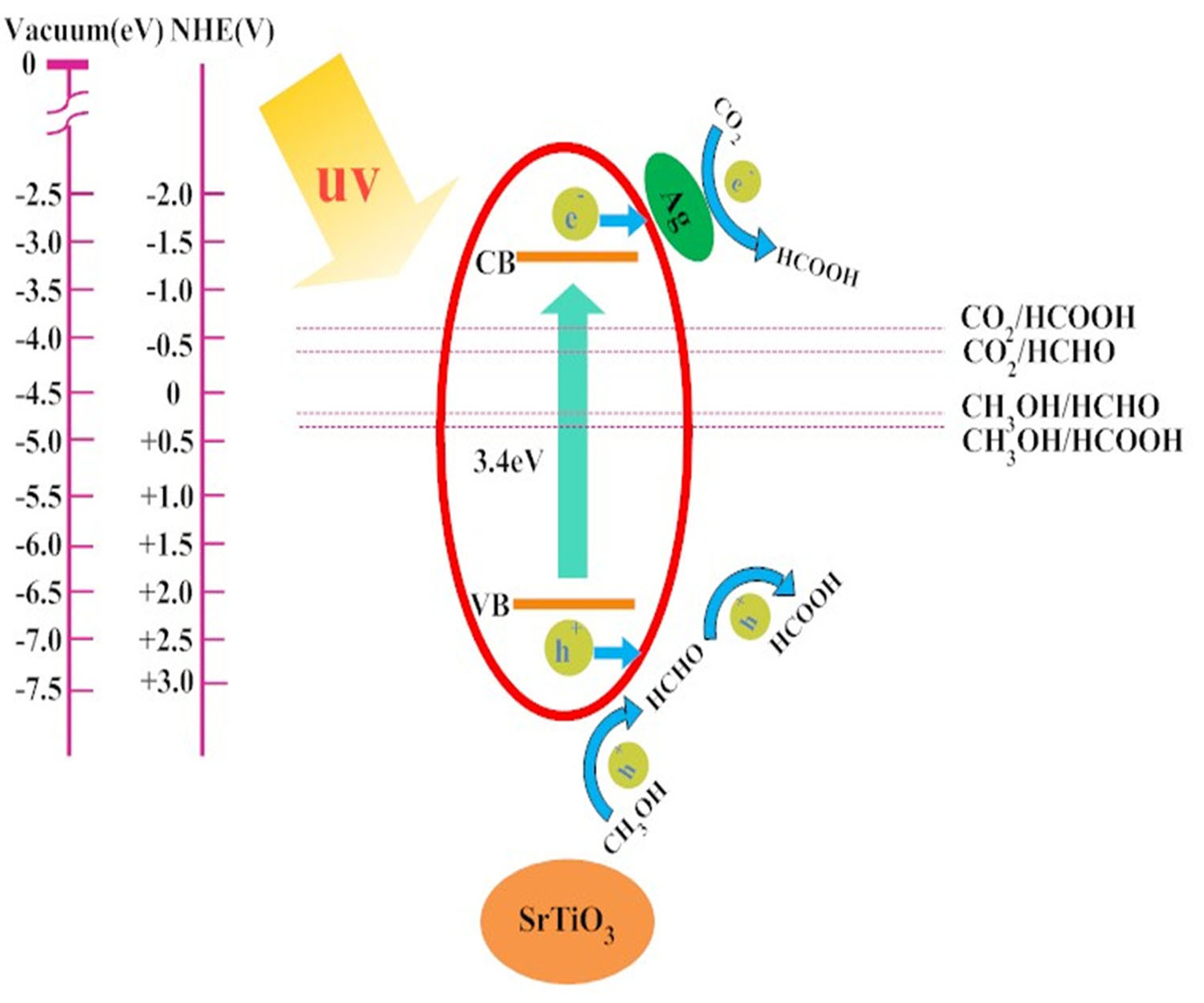