Elevated arsenic contaminant in drinking water above the WHO (1996) safe limits of 10 μgL-1   was reported at many locations in underground water of Punjab, North-West India. In rural areas, flooded irrigations and maintenance of standing water in paddy fields likely to create anoxic conditions in the soils over-lying above the shallow aquifers. The objective of the present investigation was to study the mechanism of arsenic mobilization in surface alluvial soils. Fifty gram of each of 18 soil samples were transferred to 200 ml polythene bottles, and 100 ml of deionized water was added to maintained flooded conditions. These soil-water systems were kept in BOD incubator at 250C for equilibration under anaerobic conditions of 24 and 240 hours period, respectively. After equilibration periods, pH, EC, soluble HCO3‑ and Cl- were determined for each soil-water equilibrated systems. Supernatant aliquots were withdrawn using a syringe, centrifuged, filtered and acidified with a drop of nitric acid prior to analysis for Fe, Mn, SO42- and PO43- on ICAP-AES. Arsenic in the filtrates solution was determined using hydride generation assembly on ICAP-AES.

Total dissolved As in 24 hour soil-water equilibrated systems varied from 3 to 16 μgL-1 with mean value of 9 μgL-1 (Figure 1), whereas its concentration range in different soil-water suspensions after 240 hour of equilibration period enhanced to 33 to 1761 μgL-1 with mean value of 392 μgL-1. The median, 75th and 90th percentiles concentrations of As were 8, 12 and 14 μgL-1 after 24 hour and eventually elevated to 190, 490 and 1013 μgL-1, respectively after 240 hours of anaerobic conditions. Arsenic concentration was enhanced with decreasing redox potential. The results showed antagonistic relationship of arsenic concentration with the magnitude of redox potential status of alluvial soil-water suspensions (Figure 2a). Dissolved Fe concentration versus redox status of soil-water systems determined after two equilibration periods are illustrated in Figure 2b. As the pe decreased, the Fe concentration declined in different alluvial soil water systems.

Pourbaix (pe-pH) diagrams for arsenic and ferromagnesian oxides (Figure 3 and 4) were constructed by to identify the chemical species for each of these elements in different soil-water suspensions. Aqueous arsenic species, HAsO42- and H3AsO30 along with the possible solid phase, orpiment (amorphous As2S3) as were identified in soil-water systems (Figure 3). The mono valent arsenate oxy-anion (HAsO4‑) specie was predominant in all the soil-water suspensions except soils 2, 4 and 8, where arsenite (H3AsO30) specie was identified after 24 hour of anaerobic condition. The predominance of neutral arsenite (H3AsO30) specie was observed after 240 hours of reduced incubated period in all soil water systems except soils 12, 15 and 16 in which orpiment (As2S3) as solid phase was identified. The neutral arsenite (H3AsO30) and arsenate oxy-anions (H2AsO4-) has been found to be predominantly occurred in the alluvial aquifers of Punjab between the pH of 7.05 to 8.25 and under reduced pe value from 0.77 to -4.49, respectively.  Thus, it is conclusively evident that two chemical aqueous species controlling As chemistry and its toxicity in soils are arsenate and arsenite. Arsenate is the thermodynamically stable form under aerobic conditions. Arsenite is the predominant species under anaerobic conditions and it is a neutral species at natural pH and is more soluble, mobile and phototoxic than arsenate. The orpiment (As2S3) solid phase domain predominates near the bottom of pe-pH diagram and lying over the H2O / H2g stability line in the Pourbaix diagram (Figure 3). After 240 hours of equilibrium period, arsenite (H3AsO30) specie was predominant in all alluvial soil-water suspensions. The increase in arsenic concentration was also primarily due to an increase in As (III) species in all the soil-water suspensions under more reduced conditions.  In some soil water systems (soil number 12, 15 and 16) apparent precipitation of orpiment was identified on pe-pH diagram. It is evident that total arsenic concentration continuously enhanced in these soil-water systems with decreased magnitude of redox potential. The simultaneously drastic decline in concentration of both Fe and SO42- in contrast to accumulation As in reduced soil-water suspensions of alluvial Holocene validated the formation of iron sulfide mineral in reduced alluvial soil-water systems of Punjab. Because of the differences in solubility of iron (DG= -117.11 Kcal mole-1) versus arsenic (DG = -382.64 Kcal mole-1) sulfides, precipitation of iron sulfide may remove sulfide from solution but not arsenic since the precipitation rates of iron sulfide was very rapid compared to amorphous arsenic sulfide.

The aqueous species of Fe2+, Mn2+ and MnHPO4 and solid phase of hematite (Fe2O3) were predominant in all the alluvial soil-water equilibrated solutions after 24 hours within the pe and pH ranges of -1.75 to 0.77 and 7.25-8.25, respectively (Figure 4). After 240 hours of incubation period, reduction potential status range in soil-water suspensions declined between -4.49 to -2.74 within pH range of 7.05 to 7.94. Aqueous species of Fe2+, Mn2+ and MnHPO4 and solid phase of hematite [Fe2O3] were predominant in soil-water suspensions of soils 1, 5, 6, 11 and 14. Pourbaix diagram (Figure 4) for iron illustrate that declined in iron was due to the predominantly precipitation of iron sulfide [FeS2] and or as vivianite [Fe3 (PO4)2 8H2O] minerals. The reduced solid phase vivianite [Fe3 (PO4)2 8H2O] was found in soil 2, 3, 7 and 13, respectively. Pyrite [FeS2] was found to be predominant in soil 8, 9, 10, 12, 16, 17 and 18, respectively. All the water composition falls in the stability field for aqueous Mn2+ ion (Figure 4) and its concentrations varied from 0.45 to 44.44 mgL-1. Stability diagram for manganese showed that Mn2+ ion is thermodynamically more stable and predominant across a wide pe-pH range than for Fe2+ ion. Consequently, the Mn2+ ion remain in solution in aqueous environment in which Fe2+ ions is oxidized to Fe3+ and precipitated as Fe (OH)2.7Cl0.30 below pH 6.8 at pe > -1.8 and Fe2O3 above pH 6.8 at pe < -1.8 and thus eventually contributed to higher dissolved Mn2+ concentration under reduced environments in soils. Iron and manganese concentration in the anoxic soil-water systems were as high as 1.634 and 44.44 mgL-1, respectively. The largest contributor of ferrous to the equilibrated soil-water interaction appears to be an iron oxide phase (probably maghemite, Gamma-Fe3O3, an alteration of magnetite). These results showed that dissolve Fe concentration were probably controlled by hematite (Fe2O3) under alkaline oxic condition and by iron sulfide/pyrite (FeS) or in some soils by vivianite [Fe3(PO4)28H2O] under reduced environment, where soluble phosphate concentration was high. Under reduced condition (developed after 240 hours of flooding), soil solution Fe and SO42- are governed by newly formed precipitates of pyrite (FeS2). 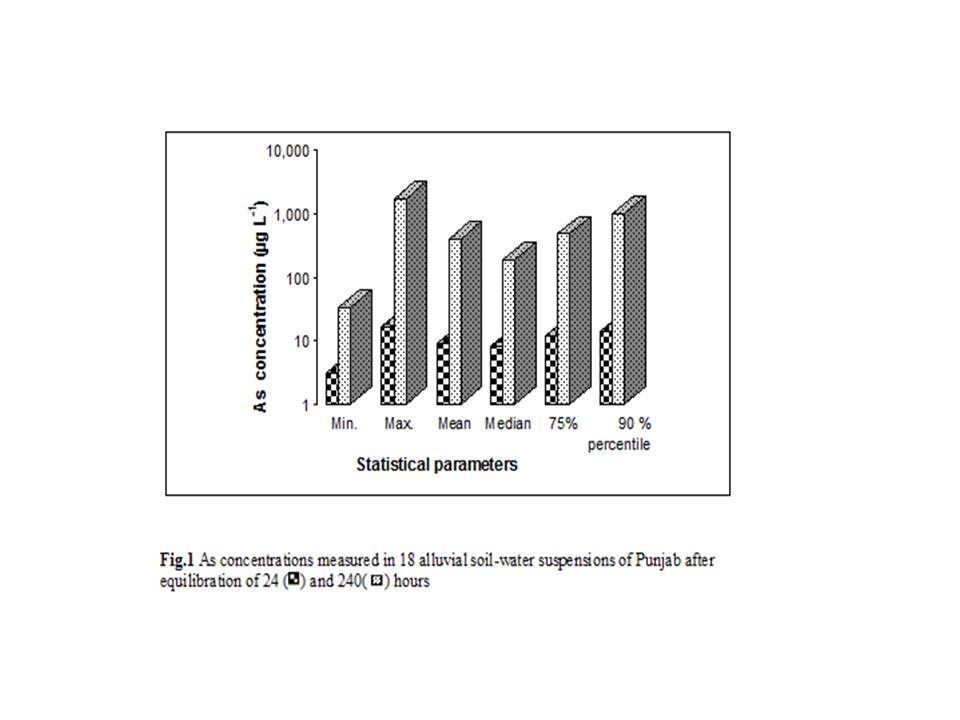 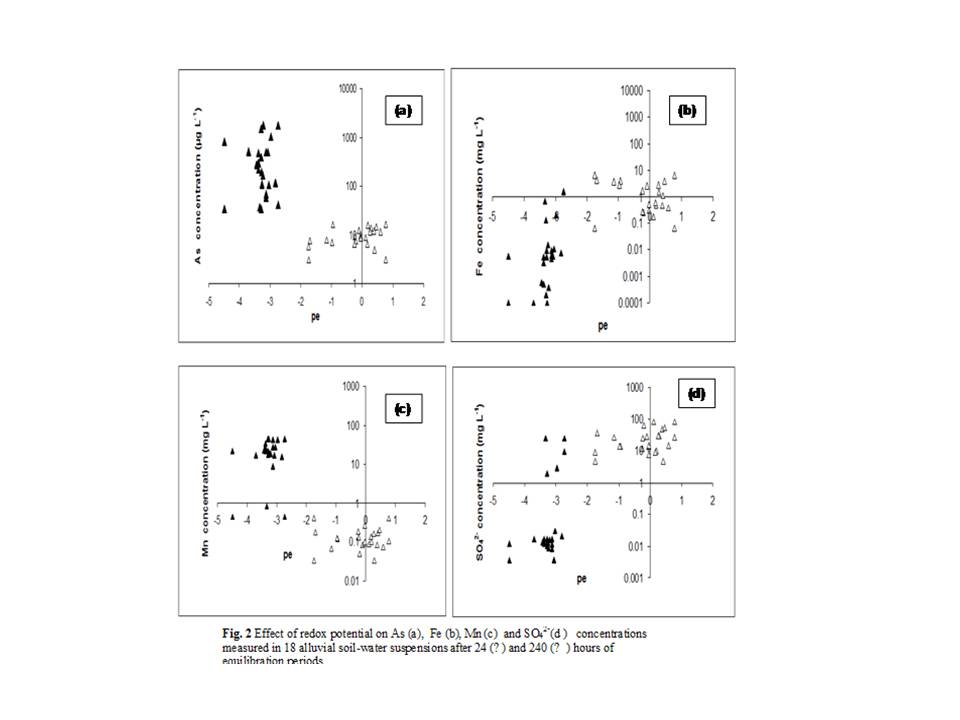 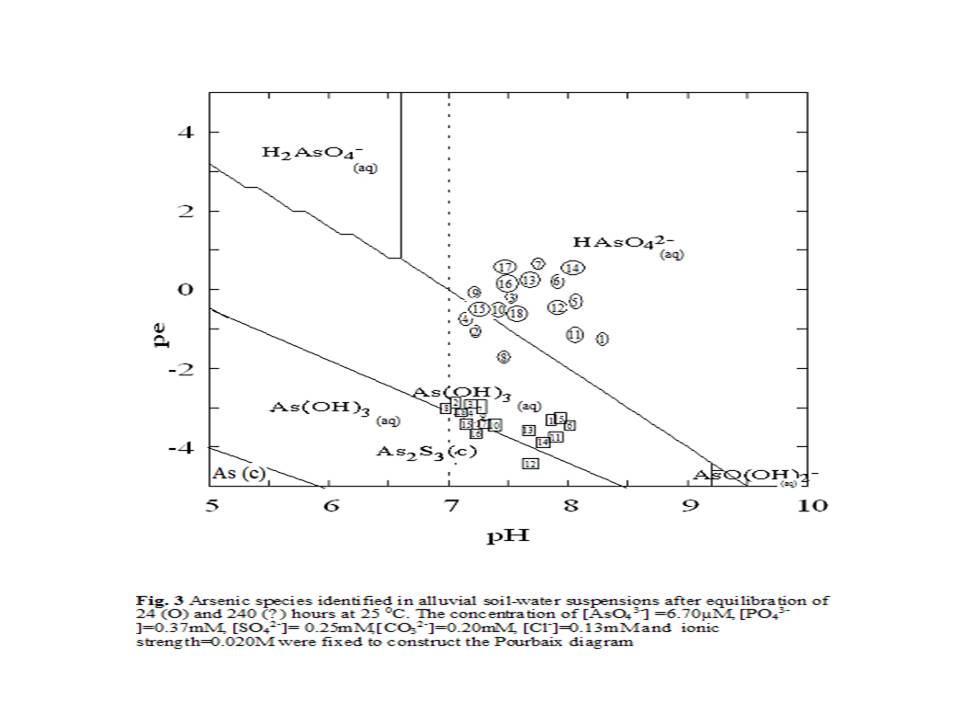 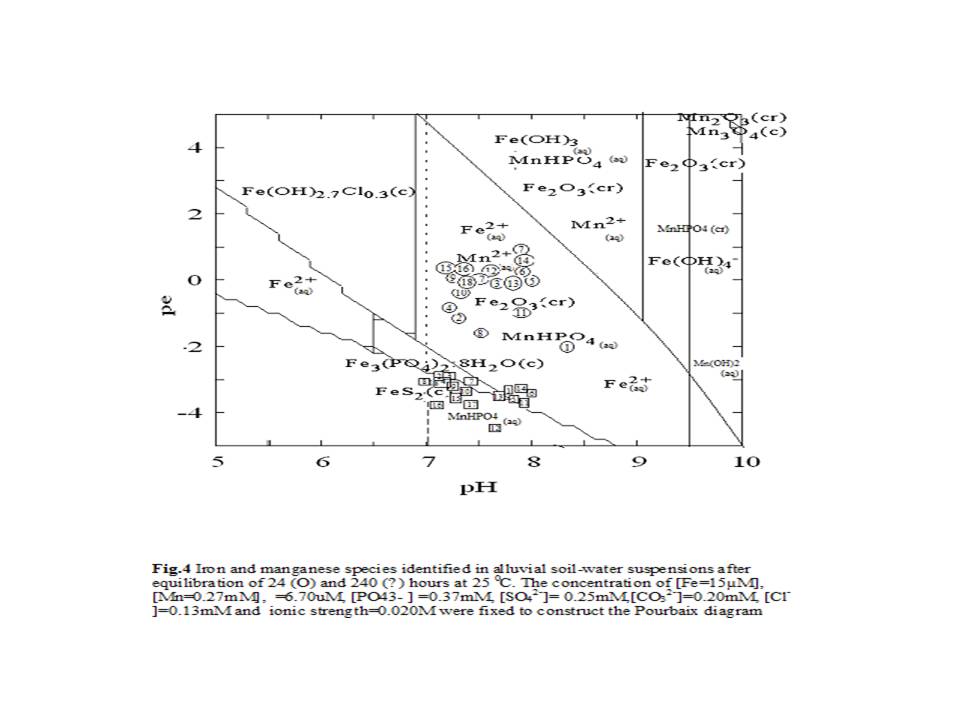