Composite Hydrogel From Chitosan and Hemicellulose for Musculoskeletal Tissue Engineering

A thermally-responsive composite hydrogel has been developed and synthesized from the natural polymers chitosan and xylan.á The new material is a viscous liquid at room temperature, but turns to a solid gel at physiological temperature (37 ░C).á Rate of gellation is controlled with addition of a salt solution.á Applications are for tissue engineering and local delivery of therapeutic agents including proteins and other drugs.á The specific application that has been tested is for delivery of the protein BMP-2 for creation of new bone and 2D cell culture for osteogenic stimulation of mesenchymal cells.

The polymer composite remains a viscous liquid for more than 2 hours at room temperature after the salt solution is added.á This allows for addition of the desired mass of growth factors and ample time to complete the surgical procedures.á Once the polymer solution reaches physiological temperature it undergoes a phase change to become a solid gel in less than 10 minutes.á This system allows for a known mass of therapeutic agent(s) to be accurately delivered to injuries of complex shape.á In situ gelling lets the material match the complex geometries of injuries that prefabricated scaffolds and carriers are unlikely to match.á The material is delivered with commonly used techniques, requiring only a common syringe to administer the liquid solution to the correct target area.á This gelling material can be used in combination with current surgical techniques without disrupting the procedure.á For example, a non-union fracture is usually fixed in place with titanium rods or fixation plates.á This thermally-responsive composite hydrogel can be injected after placement of the more traditional healing aids, filling in the areas of likely non-union to accurately provide a precise dose of growth factor and medium in which the cells can move and bridge the defect.

A thermally-sensitive hydrogel (thermogel) graft substitute made from ultrapure chitosan has been previously used to treat critical sized unicortical defects in a rat femur.1á The thermogel successfully delivered osteogenic peptides that induced healing over an 8 week time period.á The pure chitosan thermogel was successful at delivery of osteogenic factors, however it did not promote ingrowth of tissue or cells before complete degradation.á The hydrogel material did not allow cells to penetrate into the interior or allow tissue growth into the area until the chitosan was completely removed from the defect site.á One reason for this is that the chitosan only displays positive charges in the thermogel matrix.á This has a large potential to impede the healing at an injury site as cell movement is blocked at the boundary of the hydrogel.

A multi-ion environment is more conducive to cell migration within biomaterials.á To address this issue, chitosan was blended with another natural polymer, xylan, which is a hemicellulose that displays negative charges on its side chains.á We have developed this hydrogel to behave as a thermally-sensitive hydrogel, or thermogel, based on the results from the pure chitosan thermogel.á Natural polymers were chosen for this hydrogel composite because of a large emphasis in engineering circles to increase sustainability in all areas of research from biofuels to biomaterials.á Chitosan is already a renewable material as it is found in crustacean shells.á Hemicellulose can be up to 90% of the biomass material from plants used as feed stock in other applications (sugarcane, switchgrass, wood, algae, etc.).á However, as hemicellulose is only efficiently degraded by enzymes, it is not an easy product to use for further conversion.á Use of this material in biomedical technology applications provides added value for the hard to digest byproducts of biomass production as well as provides tissue engineering applications with an abundant source of renewable and biocompatible material readily available in most areas of the world.

In vitro cell culture experiments have also revealed benefits of the composite material over a pure chitosan hydrogel.á Real time PCR measurement of the 18s gene expression in D1 mouse mesenchymal stem cells (a common gene used as a control that can reveal the difference in relative cell numbers between cultures) showed that cells cultured on the chitosan/xylan composite had much higher expression of this gene compared to the cultured on the pure chitosan material (real time PCR results:á composite 18s: 1.08x10-4 ▒ 7.42x10-6; pure chitosan 18s:á 3.54x10-8 ▒ 8.89x10-9).á This indicates that there are many more cells living on the chitosan/xylan hydrogel after 3 days than on the pure chitosan hydrogel.á

Real Time PCR measurement of the expression of the osterix and runx2 genes in D1 stem cells exposed to chitosan/xylan for 3 days, or cells in monolayer with differentiation medium for 7 days, or cells in monolayer with growth medium for 7 days (Figure 3).á Gene expression levels are normalized with respect to cell numbers in each culture.á The results show that after only 3 days (chitosan/xylan 3 day), the cells grown on the xylan/chitosan composite match the bone related gene expression level of stem cells grown in osteogenic media (ODM) for an entire week (monolayer/ODM 7 day).á DMEM is normal cell culture media which does not promote any specific cell changes.á The third group (labeled monolayer/DMEM 7 day) which shows very low levels of osteogenic markers indicates the results of cells in normal media grown as a monolayer on tissue culture plastic.á The left bar of each of the three groups (black) represents osterix expression, and the right bar represents runx2 expression.á The ordinate represents normalized gene expression, based on gene/18s.

The results of these experiments show this chitosan/xylan composite hydrogel to be a biocompatible material that provides marked improvement in host tissue response when compared to pure chitosan hydrogels. 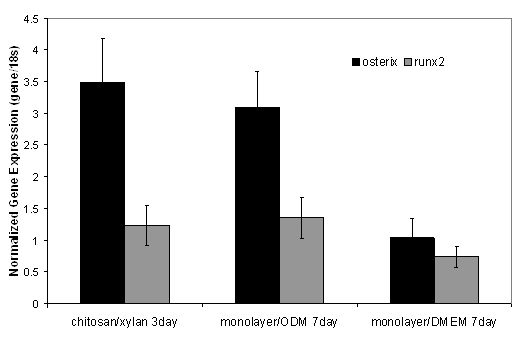 Figure 3.á Real Time PCR measurement of the expression of the osterix and runx2 genes.á Gene expression levels are normalized with respect to cell numbers in each culture.á The results show that after only 3 days, the cells grown on the xylan/chitosan composite match the bone related gene expression level of stem cells grown in osteogenic media (ODM) for an entire week.á DMEM is normal cell culture media which should not promote any specific cell changes.