Microcapsules are widely used as encapsulation systems for protection of active species[1], controlled release of various substances[2] and confined microreaction of chemicals[3], etc.  However, most of these microcapsules can only encapsulate one content within the same structure.  How to co-encapsulate multiple incompatible or functional substances in one single microcapsule, especially with precise control over the encapsulation level of each substance, is still a major challenge[4.5].  Our previously reported monodisperse multicomponent multiple emulsions[6], with co-encapsulated different droplets in the same inner structure, offer novel and diverse templates to create microcapsules with different compartments for co-encapsulation of multiple incompatible actives or functional components.  The precise and individuall control over the number, ratio and size of different inner droplets enable the optimization of the encapsulation of each active or functional component. 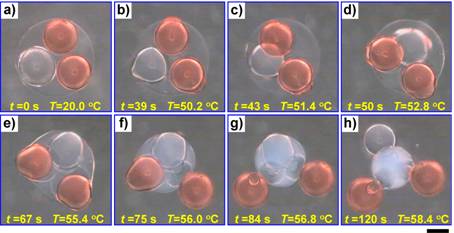 Fig 1.  Temperature-controlled release of the co-encapsulated lipophilic substances from the thermo-responsive multicompartment microcapsule.  (a) Dark-field microscope image of multicompartment microcapsule co-encapsulated with one transparent oil core and two red oil cores.  (b)-(h) The temperature-controlled release of different oil cores from the microcapsule when temperature is increased from 20 oC to 60 oC.  With increase in temperature, the thermo-responsive PNIPAM shell of the microcapsule shrinks dramatically.  Since the oil cores are incompressible but the internal pressure in oil cores keep increasing due to the shell shrinkage, the PNIPAM shell finally ruptures because of the limited mechanical strength, which results in burst releasing of the oil cores.  Scale bar is 100 µm.