This study developed fundamental understanding of nanocomposite formation by ôbottom-upö self-assembly of inorganic-organic hybrid molecules (POSS) in isotactic polypropylene (iPP) matrix. A sorbitol nucleating agent (DBS) compatible with POSS with silanol (Si-OH) functionalities promoted dispersion of POSS molecules and provided templates for self-assembly into cylindrical nanoparticles in the spun fibers. It was found that at the optimum combination of phenyl-POSS and DBS, iPP composites can be spun into fibers at higher draw-ratios compared to unfilled polymer and provided superior mechanical properties. Rheological studies revealed phenyl silanol-POSS prevented fibrillation of DBS. The interactions between DBS and silanol POSS with various functionalities were investigated using infra-red spectroscopy (FT-IR), differential scanning calorimetry (DSC), wide-angle X-ray diffraction (WAXD), nuclear magnetic resonance spectroscopy (NMR), mass spectrometry (MS), and their synergistic morphology by scanning electron microscopy (SEM). The mixtures of phenyl silanol-POSS with DBS when heated at the processing temperature of iPP (200░C) formed a low viscous transparent liquid. The cylindrical shaped nanoparticles as found in spun fibers were believed to have resulted from the stretching of this liquid complex. No chemical reaction occurred between DBS and POSS as identified from the solid state NMR and complexes of different molecular ratios were identified from mass spectrometry study. It was inferred that a combination of hydrogen bonding interactions and intermolecular π-π stacking between the phenyl rings played a major role in the formation of supramolecular complexes. Higher orientation of polymer chains at higher draw-ratios was identified to be the possible cause of mechanical strength improvement.

Our study focused on dispersion of polar, crystalline polyhedral oligomeric silsesquioxane (POSS) molecules of 1-2 nm size in non-polar polyolefins to obtain large enhancements in mechanical properties. The incompatible POSS molecules do not disperse well and remain as agglomerates of 10-20 mm size in polyolefins.[1] Such large size POSS particles act as defects and deteriorate mechanical properties.[2] In this context, POSS with non-polar side groups disperses well in polyolefins, but do not contribute much to the properties of the molded composites due to greater plasticization effects.[2, 3] So the scientific challenge of the work is to find a dispersion aid that can produce nano-scale dispersion of an incompatible POSS in non-polar polyolefins and having a subsequent improvement in mechanical properties.

This research exploited the fundamentals of nanocomposite formation by a ôbottom-upö self-assembly approach from dispersions of POSS molecules in polyolefins. These composite materials had the processing ease of unfilled polymers and were suitable for manufacturing of articles with micro- and nano-scale features by high-speed fiber spinning. The fundamentals developed in this work offered superior alternatives to most ôtop-downö polymer nanocomposites, where orders of magnitude increase in viscosity over that of the host polymers is a norm and achieving nanoscale dispersion is a challenge. The degree of nanofiller/polymer and nanofiller/nanofiller interactions was governed by the choice of polymer and nature of the side groups of POSS.[1, 4, 5]

In our work, non-reactive POSS containing multiple silanol groups were dispersed in iPP with the aid of sorbitol-type nucleating agent, di-benzylidene sorbitol (DBS). The underlying chemistry between DBS and POSS ramified some unique molecular structures in molten PP, which in turn led to nanoparticle formation in the final stages of fiber spinning and provided mechanical property improvement. á

Various grades of POSS were chosen û tetra-silanol phenyl-POSS (tetra-POSS), tri-silanol phenyl-POSS (tri-POSS), tri-silanol cyclopentyl-POSS (cyclo-POSS), and tri-silanol isobutyl POSS (iso- POSS). These were obtained from Hybrid Plastics. The sorbitol derivative chosen for this study was di(benzylidene)sorbitol (DBS) and was obtained from Milliken Chemicals. For composite preparation, isotactic polypropylene (iPP), P4G2Z-159, was obtained from Flint Hill Resources (MFI 1.95 g/10 min, Tm 165░C). The materials were mixed in a batch mixer at 200║C for 5 minutes to obtain compounds.á In some compounds the nucleating agent DBS was not used to determine the potential of nanoparticle formation by POSS molecules alone. An optimum ratio of DBS and POSS were determined using rheological study for further processing. The optimized polymer composites were subsequently melt-spun into monofilament fibers using a capillary rheometer (Instron) and a take-up device. The values of tensile modulus, tensile strength and yield strength of the fibers were determined. The fibers were characterized by DSC and WAXD and morphology by SEM.

The synergistic interactions between POSS and DBS molecules were studied using FT-IR, DSC, and MS and any possible reaction by solid state NMR. DBS/POSS self-assembled structures interdependent of iPP were observed by SEM.á

The POSS molecules with multiple silanol groups were selected so that non-covalent hydrogen bonding interactions can occur with the free hydroxyl groups of DBS which was identified by FT-IR. DBS is known to form 3-D fibrillar networks in PP melt.[6]á However, the supramolecular complexes between phenyl silanol-POSS and DBS suppressed such fibrillar network formation as revealed from oscillatory shear rheology.[7] For cyclo- and iso-butyl POSS, the DBS fibrillation was still visible which suggests insufficient interactions between non-phenyl POSS and DBS. This trend was interpreted by invoking the possibility of π-π stacking between the phenyl rings. It was confirmed by molecular dynamics simulation that DBS/tri-POSS and DBS/tetra-POSS molecules first engaged in π-π stacking and then formed hydrogen bonding leading to the formation of mutlimolecular complexes, which in turn subdued DBS fibrillation completely.á Such π-π stacking was not possible in the case of cyclo-POSS and iso-POSS with DBS system. In corroboration with the rheology data, the optimum combinations of DBS with tri- and tetra-POSS in PP also produced lowest crystallinity. In this case, the nucleating function of DBS[8] was arrested due to participation of DBS in DBS-POSS multi-molecular complexes. Insufficient interaction of cyclo-POSS and iso-POSS with DBS also reflected in no such changes in crystallinity with increasing POSS content. á

Tri-POSS and tetra-POSS formed crystalline lamella structures through self-aggregation via intermolecular hydrogen bonding between the silanol POSS molecules. In the presence of DBS, the phenyl silanol-POSS formed much smaller crystalline aggregates and distributed uniformly into the DBS network (Figure 1). On the other hand, cyclo-POSS and iso-POSS retained their circular and lamellar domain aggregates respectively, when mixed with DBS. The nature of assembly of cyclo-POSS and iso-POSS indicates greater POSS-POSS affinity, unlike phenyl silanol-POSS, which showed greater affinity towards DBS.

Fine fibers were obtained with DBS/tri-POSS and DBS/tetra-POSS compounds. PP composite formulations with 2-5 wt% of POSS were spun into fibers with close to 40% reduction in diameter. These fibers offered 60-80% increase in modulus, 50-60% increase in tensile strength, and 100% increase in yield strength compared to unfilled iPP. On the other hand, in spun fibers, the domain size of POSS particles were found to be cylindrical with close to 100 nm in diameter and 200-300 nm in length (Figure 2). The complex materials formed between DBS and phenyl silanol-POSS were liquids with low viscosity which enhanced the melt-spun fiber to be drawn at very high draw-ratio, where the liquid droplets stretched and deformed to form the cylindrical nanoparticles. Maximum tensile properties were identified due to increased draw-ratio of the fibers, which in turn produced finer fibers.

The following conclusions can be drawn from the results obtained in this study.

À        A combination of hydrogen bonding interactions and intermolecular π-π stacking between the phenyl rings played a major role in the formation of supramolecular complexes between DBS and POSS molecules. 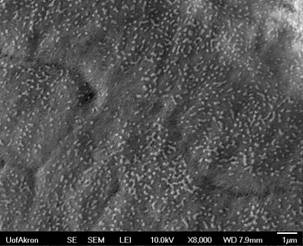 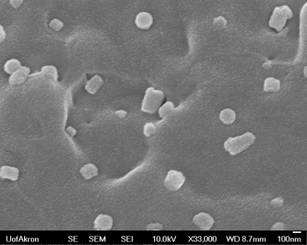 Financial support from National Science Foundation in the form of award CMMI-0727231 is gratefully acknowledged.